To date, there has been no good solution for patients suffering from muscle wasting in the anterior thigh region. We have developed a custom silicone prosthesis to help those who suffer from inadequacy of the anterior thigh/quadriceps.

Results: A single patient underwent quadriceps augmentation with a semisolid silicone prosthesis and has had an excellent cosmetic result 3 months postoperatively.

Conclusions: Because of HIV or HAART therapy, a patient may suffer from wasting in the legs, and placement of a silicone prosthesis may help to restore a patient’s confidence and improve the cosmetic appearance of the anterior thigh/quadriceps region. This procedure may have application in the realm of non-HIV patients seeking cosmetic augmentation of the anterior thigh, and further research is warranted.

Solid silicone prostheses have been used in multiple areas of the body to give volume to an area that is devoid of substance either due to trauma or postoncologic procedures and in those who suffer from hypoplasia of a given muscle group due to congenital myodystrophies. In the past decade, it has been the experience in the authors practice that patients are seeking out ways to bulk up further in muscle regions that may be unresponsive to conventional exercise routines. To that end, implants have been devised for biceps, triceps, deltoid, pectoral, buttock, calf, and thigh augmentation. Recently, patients with HIV or on highly active antiretroviral therapy (HAART) therapy have presented to the authors practice seeking bulk in areas that have been ravaged by muscle wasting and do not respond to resistance exercise. It was to that end that a custom silicone implant was devised for a patient to treat muscle wasting in the anterior thigh, which he found particularly vexing.

A 42-year-old active man suffering from HIV presented to the practice wishing to have further definition in the anterior thigh region, which had begun to wither away after years of being HIV positive and on HAART therapy. Despite a rigorous resistance exercise routine, he was unable to develop or maintain definition in the anterior thigh region to his satisfaction. He suffered from hypertension in addition to HIV. He denied any previous operations. His medications included benzapril and Cardizem for hypertension and his antiviral regimen was Prezisra, Norvir, Truvada, Retrovir, and Intellence. His preoperative electrocardiogram demonstrated normal sinus rhythm. His laboratory studies were unremarkable beyond the positive HIV test and a mildly elevated triglyceride level of 207 mg/dL (reference range, 0150 mg/dL). It was then decided that the patient would proceed with augmentation of the anterior thigh with a silicone implant. The thigh’s circumference and length were measured. A custom implant was then created that measured 10.4 × 15 cm with a projection of 2.5 cm.The implant volume was 207 mL. 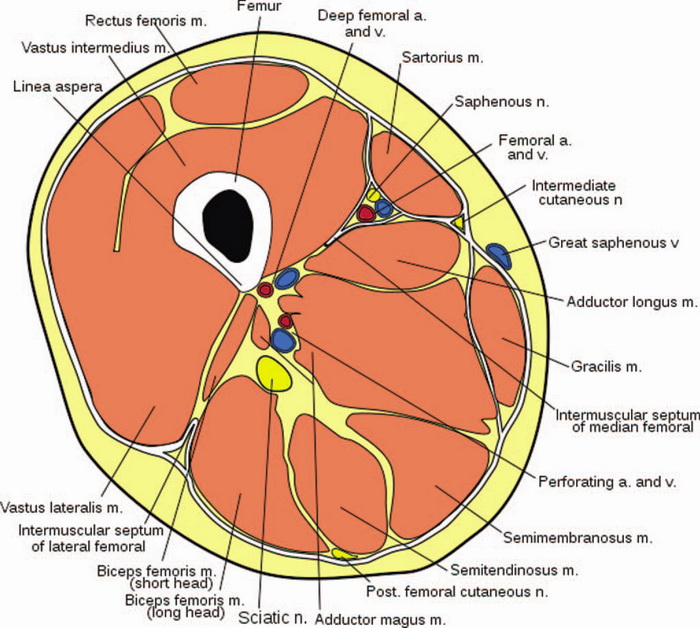 The quadriceps femoris (Latin for “four-headed muscle of the femur”) is a large muscle group that includes the 4 prevailing muscles on the front of the thigh: rectus femoris, vastus lateralis, vastus intermedius, and vastus medialis. These muscles act as the primary extensor muscles of the knee and form the volume of the anterior thigh region, overlying the femur. The fascia overlying the muscles of the anterior compartment is divided into superficial and deep layers. The deep fascia of the thigh is commonly referred to as the fascia lata. The anterior thigh is relatively free of neurovascular structures, with most structures being deep to the femur or localized to the upper medial thigh, far removed from the proposed augmentation area. The greater saphenous vein is transmitted through the superficial and deep layers of fascia at the fossa ovalis, located in the upper medial thigh. It is below the deep layer of fascia that the saphenous vein joins the femoral vessels and saphenous nerve1 (Figure 1).

The patient was identified in the preoperative holding area and marked appropriately (Figure 2). Consent was then veriÞ ed. He was then brought back to the operative suite. Anesthesia was given. The patient was prepped and draped in sterile fashion. Transverse incisions of 7 cm were made in each anterior thigh region in line with preoperative markings. The incisions were made with a 15 blade scalpel. Subsequently, dissection was performed through the subcutaneous tissues using a combination of blunt dissection and a hemostat. Dissection was carried to the level of the deep quadriceps fascia. On reaching the fascia, a 15 blade scalpel was used to make a transverse incision. This was extended with Metzenbaum scissors medially and laterally. At this point, 2-0 Vicryl stay sutures were placed in each section of the fascia (Figure 3). A subfascial plane was then dissected over top the rectus femoris using blunt finger dissection and a spatula dissector, ensuring an adequate plane for the implant in the anterior thigh (in line with preoperative markings/patient wishes).

Once a sufficient pocket had been dissected, 15 nL of 0.5% Marcaine was used to anesthetize the area. The pocket was then irrigated with a solution containing normal saline and Betadine. A custom silicone implant was then placed into each pocket, making sure to attain symmetry (Figure 4). Once the implants had been placed, symmetry was assessed. It was noted to be good. At this point, closure was begun. The fascia was reapproximated with a 2-0 Vicryl suture in an interrupted fashion. The deep dermis was reapproximated with a 2-0 Vicryl suture in a buried fashion. The skin was closed in an interrupted fashion using a 3-0 silk suture. Benzoin and Robbins tape was applied as a dressing. The legs were wrapped with Coban, and the patient was taken to the postanesthesia care unit in stable condition. 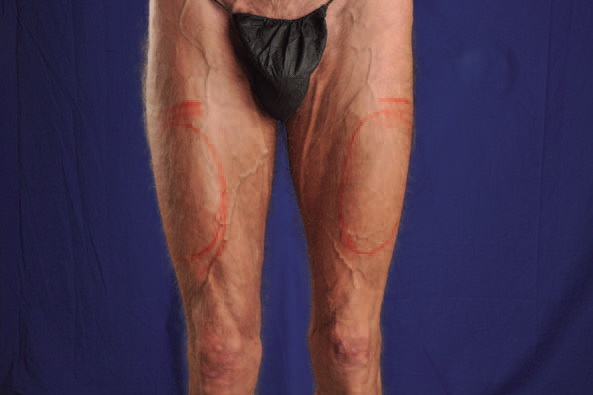 Figure 2: Preoperative markings with location of incision and proposed site of implant. 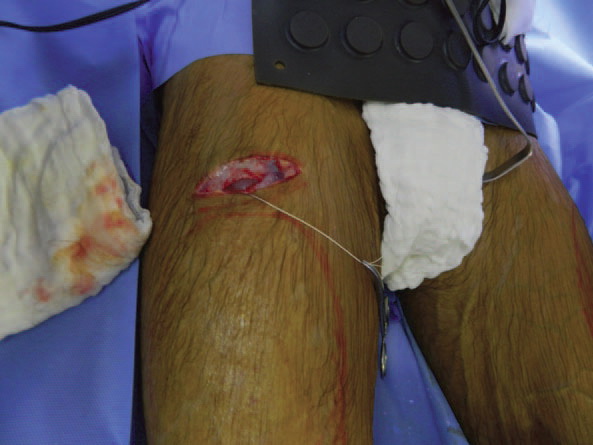 *INDIVIDUAL RESULTS WILL VARY. IMAGES DO NOT CONSTITUTE A PROMISE OR REPRESENTATION OF ANY PARTICULAR OUTCOME OR EXPERIENCE.
Results *

The patient underwent augmentation without incident. Postoperatively, he was placed into compression garments to be worn 24 hours per day 7 days a week, but garments could be removed for showering or laundering of garment as needed. At 1 week, the patient was reexamined for appropriate healing. No collections or signs of infection were noted. The patient was reevaluated at 2 weeks for suture removal from the anterior thigh skin. The incisions were healing well. At 1-month and 3-month evaluations via telephone, the patient was noted to be content with his augmentation, with significant improvement in the volume of the anterior thigh. His self-conÞ dence was improved, as noted by positive responses to questioning at the time of postoperative evaluation (Figures 5 and 6).

*INDIVIDUAL RESULTS WILL VARY. THESE RESULTS DO NOT CONSTITUTE A PROMISE OR REPRESENTATION OF ANY PARTICULAR OUTCOME OR EXPERIENCE.
Discussion

Muscle wasting in HIV-infected individuals is quite common, affecting an estimated 20% of patients.2,3 The Centers for Disease Control and Prevention defines HIV/AIDS wasting syndrome as the involuntary weight loss of greater than 10% baseline body weight during the previous 12 months or a 5% loss of weight during the previous 6 months.4 The wasting in HIV/AIDS is characterized by reductions in lean body mass or fat-free mass, of which skeletal muscle makes up 5054% of lean body mass.5 This wasting syndrome is typically characterized and accompanied by not only weight loss but also diarrhea, fever, malnutrition, depression, poor appetite, and weakness. Researchers advocate a multimodal approach to treatment of muscle wasting syndrome, including a balanced high-protein diet, a regular resistance-training workout routine, supplementation of testosterone, supplementation of growth hormone, and possible anabolic steroid use to help maintain and prevent lean muscle mass loss.

However, even with these recommended therapies, some patients still cannot achieve the improvement that they would like. Although a quadriceps implant does not solve the underlying problem of HIV wasting, it can improve the mental state of the patient. The patient was given a boost in self-confidence, as noted by the patient, which may improve the quality of life in the long term. Placement of a silicone prosthesis may have further utility in patients who do not suffer from HIV or HAART therapy muscle wasting. This, however, has yet to be determined, and further studies are necessary to evaluate the results of this augmentation in this patient and others.

While complications are possible with any procedure, we have yet to see any complications arise from this case. The most common complication that can arise with any implant surgery is seroma formation. This is best prevented with minimal dissection of the pocket, creating a tight fit around the implant. Also, a compression garment is postoperatively applied over the area augmented. In the case of quadriceps augmentation, we recommend the use of tight cling wrap around the thigh to prevent any dead space. The patient is asked to wear this wrap as much as possible for 1 month until solid scar tissue has developed.

Other potential complications include hematoma formation and infection. Hematomas are best prevented with meticulous hemostasis at the time of surgery and also with the use of compression in the immediate postoperative period to prevent empty space. Infections are prevented 3-fold in our practice: (1) antibiotics are given to the patient for 5 days after surgery (ciprofloxacin 500 mg orally twice daily for 5 days), (2) 2 g of cefazolin intravenously are given within 1 hour of incision to prevent cutaneous infections, and (3) the pocket is irrigated with a solution containing saline, Betadine, cefazolin, and gentamicin to prevent deep space infections. 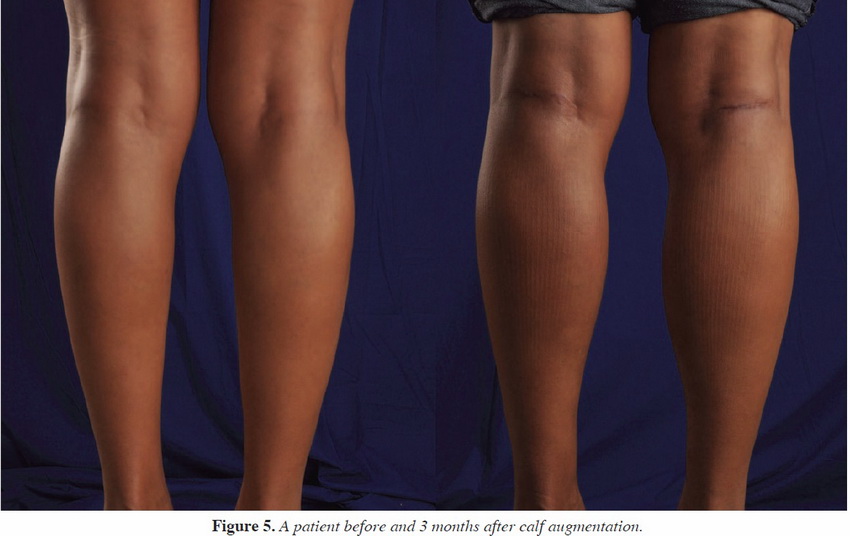 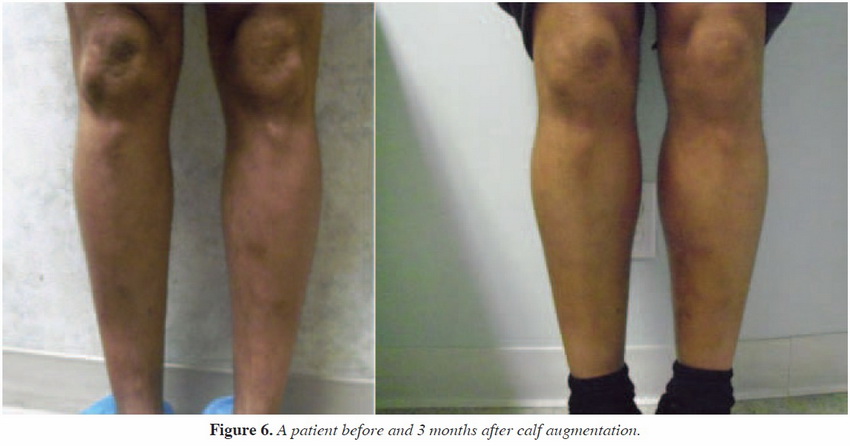 A semisolid silicone elastomer implant can be used as a means of increasing volume to the anterior thigh in patients with HIV or on HAART therapy and may have a role in purely cosmetic augmentation of the anterior thigh.

Triceps Augmentation: Early Experience With the ProcedureCalf Augmentation: A Single Institution Review of Over 200 Cases
Scroll to top