Introduction: The curvaceous woman is in vogue again. Breasts are getting bigger, buttocks are getting fuller, and there is increasing demand for a fuller, more curvaceous look to the thighs.

Some women have very slender thighs because of genetics or a vigorous exercise program. For those who have this problem, we have designed a solution: a custom implant that slides beneath the fascia lata and gives a bit more curve to the lateral thigh region.

In the days of antiquity, a curvaceous woman was a desirable commodity. A woman with curves was deemed fertile, having hips suitable for childbearing. Over time, the view of the woman changed and led to the belief that a slender woman, who was less shapely, was more attractive. Now, society has gained renewed interest in curvaceous women. A woman with a round bottom and curvy thighs have again become sexy and a sign of true femininity. However, not everyone is born with these characteristics. Some women, particularly Asian women, are born with minimal development in the lateral thigh region. Also, some women who are extremely athletic have a very flat thigh area, despite having good tone and curve in other areas. To that purpose, the authors continued in their efforts to improve form through muscle augmentation and created the thigh implant.

The prospectively collected data of 18 patients who had undergone thigh augmentation over the previous year were reviewed for postoperative complications and aesthetic results. All patients reviewed herein underwent the same procedure: insertion of a custom thigh implant (AART Corp, Reno, Nev) in a subfascial plane with meticulous hemostasis and closure in layers. 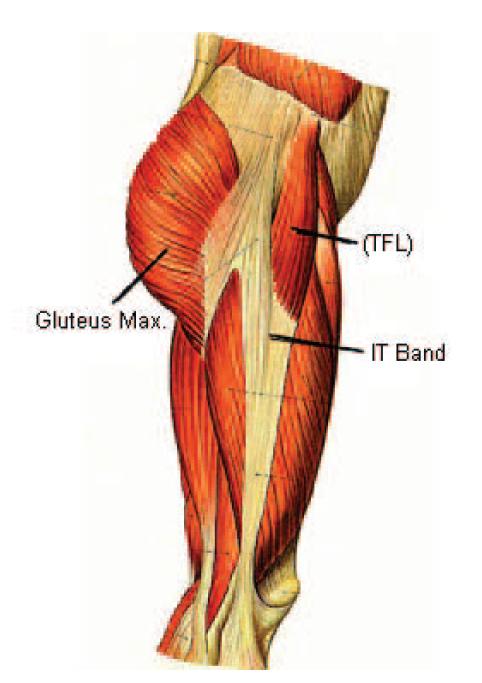 Figures 5. (A) Preoperative and (B) postoperative pictures of a patient (posterior view).

The waist-to-hip ratio (WHR) is the ratio of the circumference of the waist to the circumference of the hips. In the realm of general health, the WHR has been used as a measurement of obesity; those that have a higher index are typically more obese and have a greater the potential for serious health conditions. Research shows that people with apple-shaped bodies (more weight around the waist) face more health risks than those with pear-shaped bodies (more weight around the hips). A WHR of 0.7 for women and 0.9 for men has been shown to correlate strongly with general health and fertility. Women within the 0.7 range have optimal levels of estrogen and are less susceptible to such major diseases as diabetes mellitus, cardiovascular disorders, and ovarian cancers.1 The WHR has been found to be a more efficient predictor of mortality in older people than waist circumference or body mass index.

Women have gone to great lengths in the past to alter their WHR. The corset was invented as a tool to reduce a woman’s waist size to make her more physically attractive. Some women have resorted to hip and buttock padding to increase the apparent size of the hips and buttocks. Female cosmetic patients routinely employ liposculpture to help redefine their waist area. Of late, buttock augmentation has been another means by which a woman can increase the curves in the lower pole of the body to help achieve a more aesthetically pleasing figure. The authors have developed a solution for women who wish to increase their hip size to better suit the remainder of her figure and perhaps improve her level of attractiveness.

The placement of a lateral thigh prosthesis is not only facile but relatively safe. Because of the paucity of major structures in the lateral thigh region, the surgery can be performed with little fear of injuring a vital structure. After the incision through the skin is completed, the tensor fascia lata is exposed. It is through this band of fascia that the posterior branch of the lateral femoral cutaneous nerve arises. The lateral femoral cutaneous nerve of the thigh is a nerve of the lumbar plexus. This nerve bifurcates into anterior and posterior branches. The anterior branch becomes superficial about 10 cm below the inguinal ligament, and then it divides into branches that are distributed to the skin of the anterior and lateral parts of the thigh as far as the knee. The posterior branch pierces the fascia lata and supplies the skin from the level of the greater trochanter to the middle of the thigh posteriorly. Careful dissection of the fascia lata and use of blunt dissection below the fascia allows for the creation of a pocket with minimal risk of injury to the cutaneous nerves supplying the thigh region.

Infection is minimized through the use of perioperative administration of antibiotics, bathing the implant in betadine before placement, and minimal handling of the implant by surgical staff. Seroma formation is prevented by using compressive garments for 4 weeks after surgery. In performing various muscle augmentation procedures, notably triceps and biceps augmentation, patients who were noncompliant with compressive dressings had a higher incidence of seroma formation requiring intervention. Bleeding is prevented by meticulous hemostasis throughout the procedure and avoidance of injury to the muscles of the thigh. Implant extrusion is prevented by performing an adequate dissection below the fascia lata, but at the same time allowing for a snug fit of the fascia around the implant. Scarring is minimized by closure in layers and avoidance of tension in the area overlying the implant. Nerve damage and muscle damage are minimized by using blunt rather than sharp dissection to create the pocket for the implant (Figures 7 and 8). By using tools such as the spatula dissector and hockey dissector along with blunt finger dissection, one is able to avoid sharp dissection and inadvertent laceration of nerve structures in the operative field. Finally, compartment syndrome can be avoided with proper placement of implants that are not overly bulky and creating an adequately dissected pocket for the lateral thigh implant.